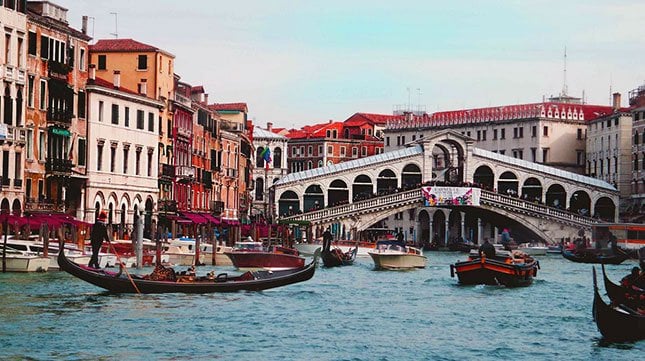 The fashion capital of the world - Italy - enthrals visitors with exquisite cuisine, endless culture and years of history. Travelling in Italy will expose visitors to a plethora of breathtaking sights and unforgettable experiences. A few famous destinations in Italy have been listed below, with details on what each destination can offer to Muslim travellers.

Rome needs no introduction for its prominence in ancient world history.

The capital city of the country offers a wealth of world-renowned historic sites such as the Colosseum and the Roman Forum, as well as several other attractions such as the National Etruscan Museum, Museo Capitolino, Villa Borghese, Galleria Borghese, Piazza Navona, Piazza Del Popolo and the Seven Hills of Rome. Rome offers a number of Halal facilities to Muslim travellers including several Halal restaurants that serve delectable Italian and local cuisine. Popular Halal restaurants in Rome include Luna Caprese, Super Pizza Allam Fayez, Himalaya's Kashmir, King Pizza and Jamuna. Rome is also home to many mosques, including the Mosque of Rome - which is the largest mosque in Europe. The Rome Muslim Center, Masjid-e-Rome, Quba Mosque and Masjid Al Rahman are also available for Muslim travellers.

Click here for a Muslim-friendly city guide to Rome.

Venice is famed for its enchanting romantic ambience and fascinating historic attractions.

All transport in the city is done via a delightful network of waterways spread across Venice, making it the world's sole pedestrian city. Visitors could check out famous attractions in the city such as Doge's Palace, the Clock tower, Rialto market and Bridge and the Zattere. Venice offers a fair share of Halal restaurants serving both local and international delicacies. Pizza e Poi, SKK Shock Kebab Italy, San Polo Kebab and Doner Kebab are amongst the notable Halal restaurants in the city. Two main mosques are also available in the city - Al-Rahma Mosque and Venezia Centro Islamico.

Click here for a Muslim-friendly city guide to Venice.

Immensely popular amongst fashion-enthusiasts and art-lovers, Milan offers a tasteful mingling of history and modern life.

In addition to popular iconic attractions such as the Porta Romana and the Castello Sforzesco, Milan offers numbers of museums, amongst which the Pinacoteca di Brera, PoldiPezzoli Museum, CivicoMuseoArcheologico and the Natural Science Museum are arguably the most famous. The best Halal restaurants in Milan offer a variety of cuisine ranging from Italian to Middle Eastern to Turkish food, giving visitors a wide range of options to choose from. Well-known Halal restaurants include Aladino, Kashmire Restaurant, Ristorante Istanbul, Prince Kebab, Mevlana Doner Kebab, Imperator Kebap and The Original Felafel. A few mosques are also found in Milan; Masjid Milan and the Islamic Cultural Institute are perhaps the two most note-worthy locations.

Click here for a Muslim-friendly city guide to Milan.

Florence has captivated visitors throughout the years with its breathtaking sights and surrounding serenity. The town center offers fascinating historic sites such as the Palazzo Vecchio and the Ponte Vecchio, in addition to a number of other places-of-interest in Florence including Santa Maria del Fiore, Giotto's Tower, Baptistery and the Palazzo Vecchio.

Both local and international Halal cuisines will be available at numerous Halal restaurants across Florence, with Pak Halal Kebab, ZamZam Pizze & Kebab, Noor Doner Kebab and Mini Market being amongst the more popular spots. A few mosques are also located in Florence including the Comunita' Islamica Di Firenze E Toscana and the AssociazioneIslamica Di Firenze.

Click here for a Muslim-friendly city guide to Florence.

Other popular destinations in Italy that are definitely worth-visiting include Naples, Verona, Palermo, Bologna, Sorrento and Pisa. There's something for everyone here.