What Is The Meaning of Nikkah?

Nikkah is the Islamic marriage ceremony that occurs between a Muslim man and Muslim woman, combining their lives as partners going forward. It is a personal contract as well as a social announcement of such a contract. Getting married is said to “complete half of somebody's deen” and is an act that is strongly encouraged by Qur'an and Sunnah.
"And one of His signs is that He has created for you, spouses from amongst yourselves so that you might take comfort in them and He has placed between you, love and mercy. In this, there is surely evidence (of the truth) for the people who carefully think." - [Al-Qur'an: Surah 30, Verse 21]
The Prophet Muhammed (saw) said: “Marriage is my Sunnah. Whosoever keeps away from it is not from me.” - [Sahih-Al-Bukhari]
Steps to Getting Married in Islam
The stages of a Muslim Nikah ceremony are as follows: 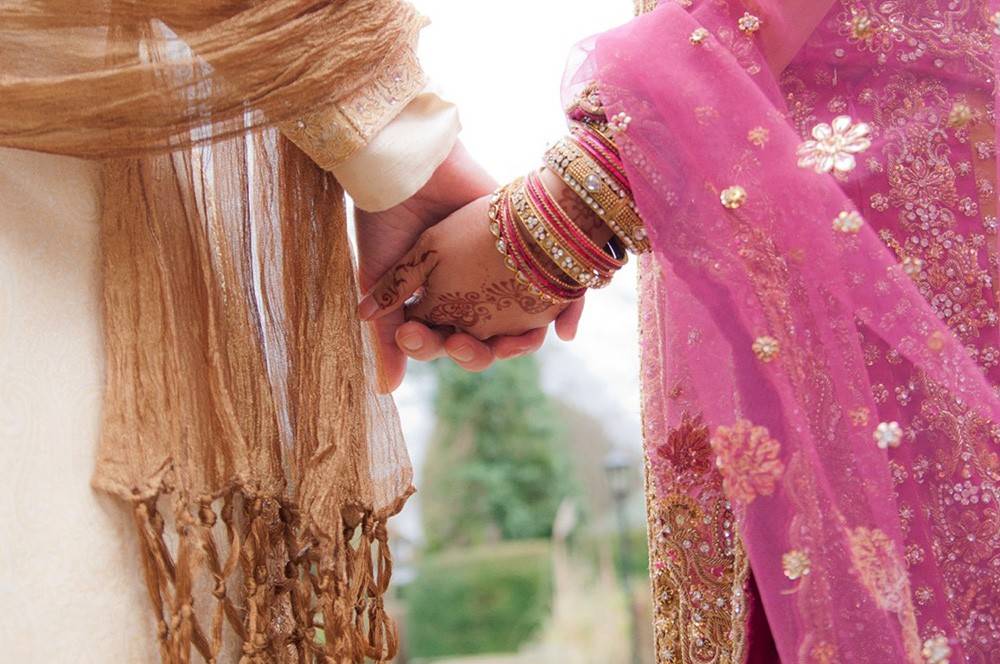 This is the first step of a Muslim wedding. Usually, the elders in the family will seek a suitable partner for their children through friends, family, or marriage consultants. The proposal for marriage is then sent to either the bride or the groom's parents. Alternatively, a young man may approach the father or guardian (wali) of the woman he wishes to marry and ask for her hand.
“A woman may be married for 4 reasons: for her property, her family status, her beauty and her piousness in religion, blessed are those that marry her because of her deen (piousness).” - [Sahih-al-Bukhari & Sahih-al-Muslim]
Note: There is no intermingling of two non-mahrams or “dating” allowed before getting married. The bride and the groom are however allowed to meet and talk in a controlled setting with a mahram (father/brother/guardian) present. 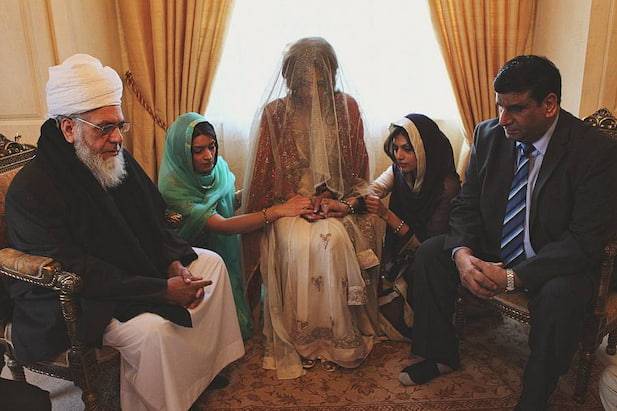 The sought-out party will then accept the proposal after receiving consent from the man/woman who is to get married. This is a very important step as there is no moving forward if there is no consent. Any conditions/ terms of marriage must be agreed upon before moving further as well (e.g. moving to another country after marriage, etc.)
Khansa bint Khidam Al-Ansariya narrated that her father gave her in marriage when she was a matron and she disliked that marriage. So she went to Allah's Apostle and he declared that marriage invalid. - [Sahih-al-Bukhari] 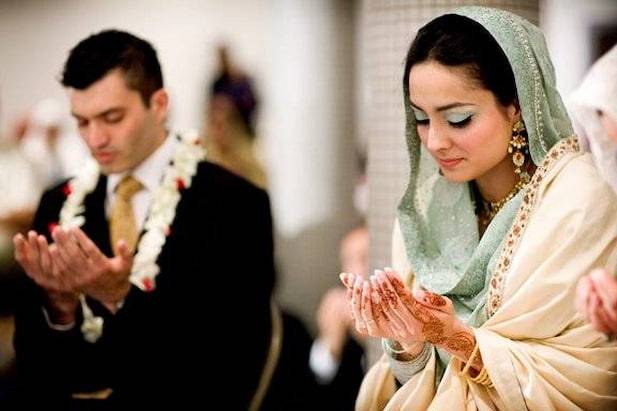 Image Credit: www.mccminnesota.org
Then comes Nikah, which is the actual ceremony of marriage. There are a few things that are involved in the Nikah being valid. They are:
- Mahr: The groom must present the bride with “mahr”, a marriage gift or dower. It may be in the form of money, jewelry, or other things of value, or even a simple act. There is no specified amount or description for mahr, it depends on different people and their cultures. Mahr may be paid upfront, promised at a later date, or a combination of both.
“And give the women (on marriage) their dowry as a free gift; but if they, of their own good pleasure, remit any part of it to you, take it and enjoy it with right good cheer.” - [Qur'an 4:4]
Sahl bin Sad (rali) narrated that the Prophet (saw) said to a man, "Marry, even with (a Mahr equal to) an iron ring." - [Sahih-al-Bukhari]
- Ijab-o-Qubool: Then comes “Ijab” expressing the willingness to get married and “qubool” acceptance of the offer. Qubool is usually granted by the wali on behalf of the bride. A written contract (Aqd-Nikah) is then signed by the bride, groom, and two witnesses of sane mind (two males, or one male and two females). The wali must also be present, otherwise, the marriage is invalid.
- Khutbah: The Imam (or any other knowledgeable Muslim) will then address the people gathered at the Nikah ceremony and the bride and groom with a sermon, most often about Islamic marriages and the Sunnah of Prophet Muhammad (saw). 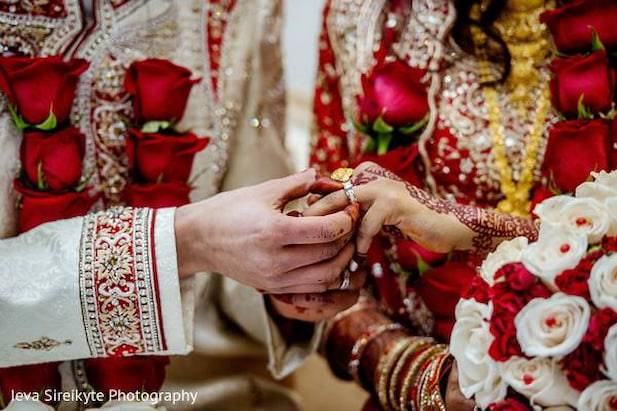 Image Credit: www.maharaniweddings.com
Once the Nikah is over, a wedding banquet called the “walima” is held by the groom. One of the main purposes of a walima is to let the community know that a marriage has taken place between two people, this is important as secret marriages are discouraged and a marriage is only said to be valid if it is made known.
The other purpose of a waleema is to celebrate with friends, family and loved ones. It is also very important that the poor people of the community are invited to the banquet along with everyone else. It is better when the ceremony isn't extravagant or wasteful, as the Prophet (saw) has said:
“The most blessed nikah is the one with the least expenses.” - [Al-Bayhaqi]
He (saw) also said: “The worst food is that of a wedding banquet (walima) to which only the rich are invited whilst the poor are not invited. And he who refuses an invitation (to a banquet) disobeys Allah and His Messenger (saw).” - [Sahih-al-Bukhari]
Narrated by Anas: “The Prophet did not give a better wedding banquet on the occasion of marrying any of his wives than the one he gave on marrying Zainab, and that banquet was with (consisted of) one sheep.” - [Sahih-al-Bukhari]

Where to Find Nikah Services

There are many agencies around the world that provide Nikah services. Think of them as a matchmaking platform, only that these Muslim wedding services are completely Halal. Some of them exist purely offline, but most are taking their platforms online to keep up with the modern world. Of course, the process will depend on the particular country and the particular agency (even though the process of Nikah is well defined and exact, the process of finding a partner is not).
There are many places that offer Nikah services that do not include the process of finding a match but do guide you through everything else, i.e. registration, overseeing of the ceremony, etc. If you are unsure of where to go for Nikah services in your country, your closest mosque would be the best bet. Even if they themselves do not provide such services, they will be able to direct you to those who do.
Here are some places where you can find Nikah services and other useful information in a few countries around the world:

The United States of America