As the largest and most populous city in the United Arab Emirates (UAE), and one of the richest and most well-developed Muslim countries in the world, Dubai is an amazing place to visit. As such, it draws millions of tourists every year; its top points of attractions are architecture, shopping, and modern lifestyle.

Amongst its stunning architecture, Dubai has its fair share of grand and majestic mosques that might not be as tall as the world-famous Burj Khalifa (the tallest building in the world), but make just as much of an impact. When planning a trip to Dubai, make sure to get yourself a Dubai mosque list. We'll start you off with the most beautiful mosques in Dubai to visit. 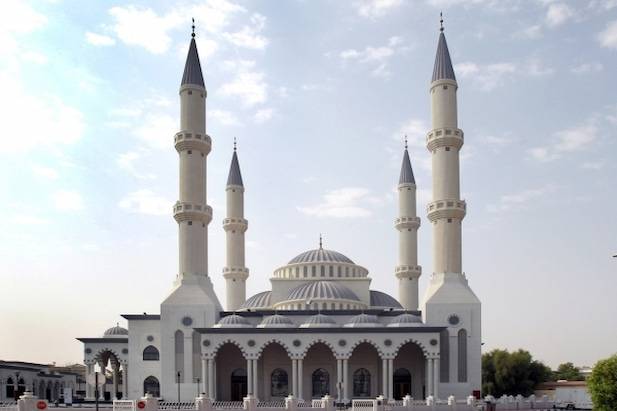 Al Farooq Omar Bin Khattab Mosque, named after Umar Bin Khattab, a companion of the Prophet Muhammad (sal), who was later nicknamed Al Farooq, is a famous mosque in Dubai. It was originally built in 1986 but has since been through two renovations in 2003 and 2011. Following the second renovation is when the Al Farooq mosque became one of the largest mosques in Dubai, with a capacity of 2000 people. The mosque is often referred to as the 'Blue Mosque' because the architecture was inspired by Istanbul's Blue Mosque, and presents a mix of Ottoman and Andalusian architecture. This was the third mosque in Dubai to open its doors to non-Muslim visitors, along with daily tours (except on Friday).

If you're trying to locate a nearby mosque in Dubai's Bur Dubai area, the Grand Mosque is definitely something you cannot miss! Located across the Dubai Museum road, it is one of the oldest mosques in Dubai and the cultural and religious center of Dubai Muslims.

Originally built in 1900 as a madrasah for children, it was then demolished in 1960 and renovated in 1998, although the original structure of the building has been kept the same through for more than 100 years! The mosque's wooden and stained glass windows represent the era and the area in which it was built. The minaret, which looks like a lighthouse, is designed in Anatolian architecture and is the tallest in the city. Non-Muslims aren't allowed into the mosque but are allowed to go up the minaret which offers stunning views of the mosque and the city. 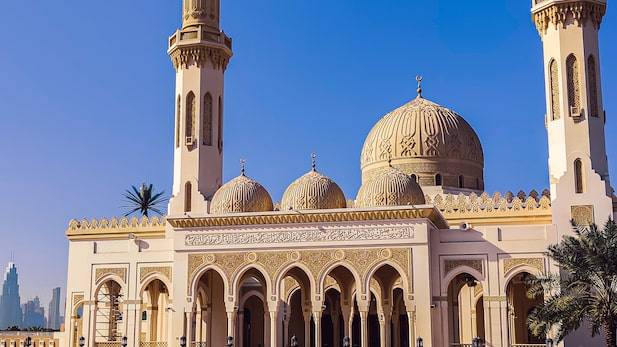 As another contender for the title of the most beautiful and famous mosque in Dubai, this stunning mosque is situated in the Jumeirah neighborhood. It was built in 1976, influenced by the traditional Fatimid style. It is said to be the most photographed landmark in Dubai, and we can see why especially when it comes alive with bright lights as the sun goes down. The inside of the mosque features gorgeous intricate designs of pastel shades, Islamic calligraphy, and golden chandeliers. In line with the mosque's “Open doors. Open minds” program, it is open to non-Muslims and also offers guided tours.

Located on Al Wasl Road in Jumeirah, this is one of the most famous Shia mosques in Dubai and was founded by the Iranian community in Dubai, in 1979, with the aid of the Iranian Red Crescent. The architecture is inspired by quasi-Fatimid with Persian influences. The outside of the mosque and its dome are covered in traditional blue tiles, similar to the architecture and design of the Iranian Hospital situated across the road from it. The interior shares the same striking blue tiles with green and gold accents, with Arabic inscriptions over them. The mosque houses several halls, including a massive library with books on many different topics and languages including Arabic, Persian, Urdu and English. Non-Muslim visitors are allowed into the mosque on guided tours (4 times per week). 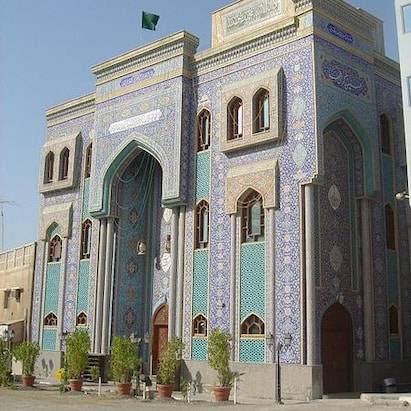 The second of the two most famous Iranian mosques in Dubai also deserves its spot on this list for its stunning architecture and culture. This mosque is also located in the Bur Dubai district of Dubai, near the old textile souk, and represents Persian-style architecture. Its exterior and dome are designed with extensive Persian faience tile work and calming blue background with floral patterns. Green, yellow, and red are the other most common colors you'll find here, along with the calligraphy of Quranic quotes drawn in gorgeous swirls.

If you're looking for a nearby mosque in Dubai when in the Al Barsha area, this mosque is a sight to behold! Situated near the Mall of Emirates, it's stunning red architecture was influenced by the Turkish buildings of old, resulting in a mix of Ottoman and Emirati culture and design. This makes it one of the most unique mosques in the UAE, and what makes it stand out strikingly against all the other buildings. The outside also features white accents, as well as gold domes and balconies on the minarets.

The mosque is a new addition to the Al Barsha area, having been opened in 2014 by His Highness Shaikh Mohammed bin Rashid Al Maktoum, Vice-President and Prime Minister of the UAE and Ruler of Dubai. It has the capacity to accommodate 1500 worshipers and is a peaceful place with gorgeous lighting for some quiet time and religious reflection. Walking along the banks of the Dubai Marina, you'll find Masjid Al Rahim, one of the most beautiful prayer places in Dubai. Following a four-year construction, it was opened in 2013 and is the only mosque in the Marina. It features prayer rooms for men and women, ablution areas, a madrasah, and an Islamic library. The outside features a minaret and dome, which becomes even more stunning in the evening when the lights from the skyscrapers nearby fall upon it, bathing it in blue and white.

Khalifa Al Tajer is well and truly deserving of the title of the most unique mosque in the UAE because it is the first Eco-friendly mosque in the country! Located in Bur Saeed Street in the Deira neighborhood of Dubai, it opened its doors to a capacity of 3500 worshipers in 2014.

The environment-friendly design of the mosque features ablution stations with water-saving technology, energy-efficient thermal-insulation systems, solar panels, energy-saving lights and fittings, and air conditioners that emit lower greenhouse gases. Although the mosque is gorgeously decorated, it might seem “simple” in comparison to other mosques of this size in Dubai. This too is so that the mosque can stay as environment-friendly as possible because the simple Bedouin Emirati architecture of the mosque drastically reduced cost and energy.