A Guide to al-Masjid an-Nabawi, Medina

Al-Masjid an-Nabawi or the Prophet's Mosque, the second-holiest site in Islam, is one of the world’s oldest mosques, as well as one of its largest. Located in the sacred city of Madinah (also spelled Medina), in Saudi Arabia, the stunning mosque is the most important in the city and one of the most significant of sites in Islamic history as it was built by Prophet Muhammad (peace and blessings be upon him) in 622 CE, and today is home to his final resting place. Al-Masjid an-Nabawi is not just a mosque, but the location of inspiring historical birthplace of Islam and its traditions. It plays an important role during the Hajj season, and is visited by millions of pilgrims each year. Outside of Hajj season, the masjid still sees countless worshippers from around the world each day, due to its undeniable importance. Visiting the mosque is a dream for every believer, and, thus being given the chance to do so is a blessing. The masjid and its upkeep are the responsibility of the Custodian of the Two Holy Mosques. An interesting fact about Al-Masjid an-Nabawi is that it is open throughout the year.

Find a Mosque near you in Saudi Arabia

Explore Halal Restaurants near you in Saudi Arabia

Where to pray in Madinah shouldn’t even be a question for any Muslim visiting the city, and even though there are numerous other mosques in Madinah, praying at the Prophet’s Mosque is a tremendous blessing. Our brief guide to the mosque takes you through its incredible history, from its foundation all the way to its beautiful present state. 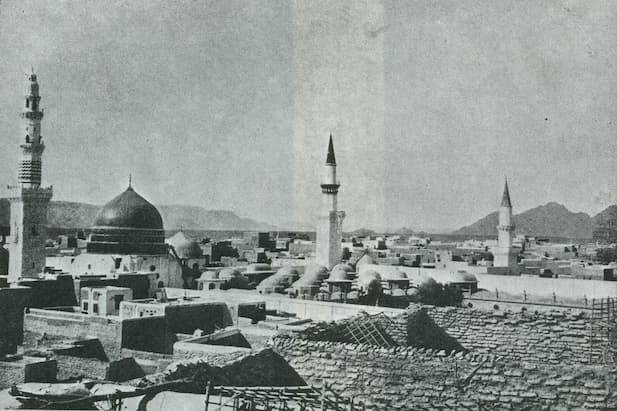 On the Prophet Muhammad’s (peace and blessings be upon him) leaving of the city of Makkah, and following his arrival in the city of Madinah, Al-Masjid an-Nabawi was originally built by his own hands in 622, and over and above being a prayer place, functioned as a court, community center, as well as a religious school. The mosque’s construction took seven months, and it was enlarged and expanded over the years, with surrounding houses being demolished by the second caliph Umar ibn al-Khattab (may Allah be pleased with him), in order to facilitate the new constructions, and eventually demolished and rebuilt in 649 by the third caliph Uthman ibn Affan (may Allah be pleased with him), with prayer halls facing the Kaaba in Al-Masjid al-Ḥaram in the city of Makkah. 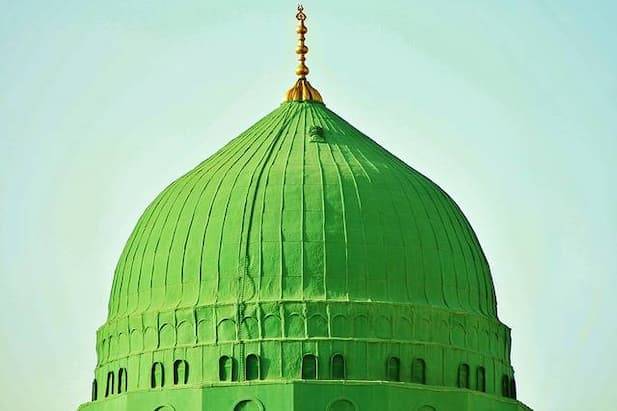 In the years since, the mosque’s floor area was further expanded, with more demolitions made around the mosque, minarets were built in, as well as its iconic “Green Dome,” Qur’anic verses were inscribed in beautiful Islamic calligraphy on its walls, more columns were erected, and further changes made to its interior and exterior. In 1992, after a number of changes made by Saudi Kings; King Faisal and King Fahd, the mosque covered an area of 1.7 million square feet, with 27 new courtyards and elevators to accommodate the rising number of worshippers visiting the holy Mosque.

To this day, with the number of Muslim worshippers visiting al-Masjid an-Nabawi is consistently rising, the Mosque is constantly being expanded and made more accessible for the millions that visit it. It is in fact now known to be 100 times the size of the original building that was initially built. During Hajj season, many pilgrims visit the mosque because of its connection to the Holy Prophet Muhammad (peace and blessings be upon him), hence the ground floor of the Mosque, as well as its roof, and the squares surrounding the Prophet’s Mosque, are packed to the brim, with worshippers even spilling on to the streets during this time. 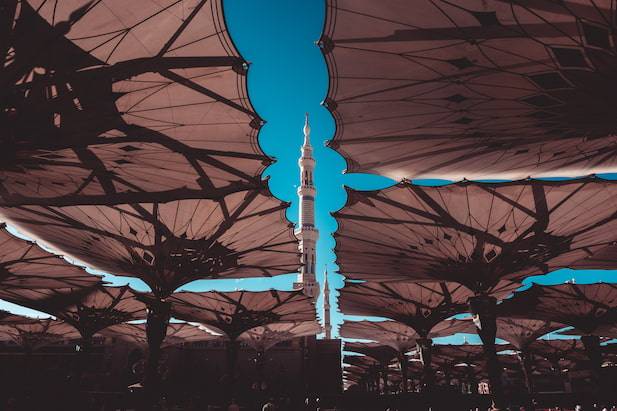 Al-Masjid an-Nabawi’s exterior is impeccably beautiful and awe-inspiring. The building itself is huge, with numerous minarets, a large Green Dome and a smaller inner dome. The courtyard that wraps around the masjid can accommodate thousands of worshippers, and is equipped with electronic umbrellas that expand during the day to give much-needed shelter and shade to those praying outdoors. There are a number of washrooms and wudhu facilities, and the courtyard is generally divided so that men and women have separate areas to offer their prayers.

Surrounding the mosque are countless hotels which have been built to accommodate all of the worshippers visiting the city, in addition to restaurants and shops selling a variety of succulent dates, traditional prayer garbs and other Islamic clothing, food items and more. Many businesses remain open throughout the day and night, making it known as a city that doesn’t sleep. 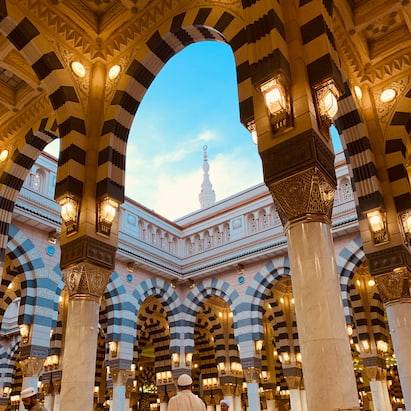 The interior of al-Masjid an-Nabawi is equally as stunning and spectacular as its exterior. Floors covered in lush carpets for as far as the eye can see, gigantic chandeliers, extravagant arches, large pillars, marble-covered walls with Qur’anic verses, racks of Islamic books and Qur'ans, large water coolers and thousands and thousands of individuals worshipping are some of the things you are bound to see upon entering the masjid. The mosque has numerous large prayer halls, for both men and women and countless washroom and areas for wudhu can be found throughout the mosque. It is illuminated during all hours, day and night, and has an energy that has the ability to make worshippers even forget the time of day while inside.

One of the most important places in the mosque, is Ar-Rawdhah an-Nabawiyah. Worshippers visiting the mosque will make it a point to visit the Raudhah and offer a few nawafil prayers here before departing, as it is the place between the Holy Prophet Muhammad’s minbar, or pulpit, and the Prophet’s burial tomb. Distinguished by a green carpet, the area is so sacred that prayers or dua made here are said to be answered. The small space cannot however accommodate the number of worshippers visiting the mosque, so access at most times is restricted.

The mosque’s iconic Green Dome marks the place where Prophet Muhammad’s (peace and blessings be upon him) burial chamber can be found, and buried next to the Prophet are the first two Caliphs, Abu Bakr and Umar. It is also the exact spot where his house with his wife Aisha (R.A) once was. The chamber is protected by a gold grill, which prevents worshippers from directly seeing the graves. There are also numerous other areas, and rooms, the minarets, the minbar, the mihrabs within the masjid that carry with them incredible stories from the Prophet’s time.

Al-Masjid an-Nabawi’s serenity is indescribable. The feelings and emotions that it evokes in the worshippers cannot be explained. The mosque exudes calmness and peace even while packed with thousands, and is a destination that cannot be properly put into words due to its magnificence. Its energy is magnetic and the reward of a prayer exceptional. May Allah (SWT) grant us all the ability to visit and offer our prayers at both of the Holy Mosques. Ameen.

Attractions to visit in Saudi Arabia