The Journey from Tsitsitkamma to George in South Africa Part 4

The next 160 km drive takes you to George passing yet again a number of scenics, must-see towns.

The first stop is Plettenberg Bay-synonymous with the spectacular Beacon Island hotel. The resort forms part of the Tsogo Sun chain however works on a timeshare basis and needs to be booked out for a week's stay so an overnight stop is not an option. The hotel though is strategically placed on the ocean so when standing on the pool deck you get a full ocean view, which gives off the illusion of being on an island. With easy access to the beach, this location is a prime holiday destination. This picturesque town offers world-class coastal living and tourism at its best with its pristine beaches and the tourist life coming to life on the main road. The beaches also offer to lookout points for whale watching when in season- which is predominantly between June and November. Even if you don't get a glimpse of the whales you will still get the opportunity to view spectacular views of the Cape Peninsula or you can enjoy scuba diving with seals or dolphins. There is one halal option but with the variety of fresh seafood available, food is easy to come by. 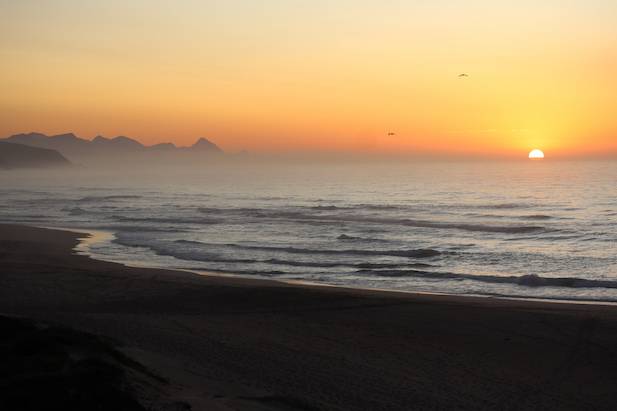 Leaving Plettenberg Bay leads to the next town which is Knysna. Back in the day, Knysna was a sought-after holiday destination and holidaymakers would flock towards this quaint mountainous town. However as time passed, Knysna lost its charm and has become somewhat neglected. Food is a bit difficult to come by and even finding prayers rooms is a challenge. The advice though is to still pass through and at the very least take in the sights. Some of the notable activities include a cruise around the Knysna lagoon which although a bit pricey offers absolutely scenic views of the Knysna Heads. The lagoon is a natural wonder due to its water being fed by 5 different rivers however the winds on the trip can be quite strong so ensure that you take a jacket with you. Knysna is also known for its oysters so if you are a lover of seafood - oysters in particular- please do give them a try. Be cautious though because many of the restaurants use wine during their preparation so your best bet is a takeaway rather than a fine dining experience. If you trail up the mountain pass, passing the exquisite homes built on the mountain pass you will come to a secluded pathway that leads to the Knysna Heads. The panoramic views of the ocean, lagoon, and mountains offer another picture-perfect moment with the two mountains -regarded as the 'heads' - appearing almost as though they are parting to make way for the pathway between the lagoon and sea. The eastern side of the head is easily accessible to all but the western side requires a guided tour which can be chartered from the waterfront - this trip though is not really suited for children. While the eastern side is a more family-friendly stop, one is still urged to practice caution, especially with children because the railings are not as secure as one would hope and one wrong slip will send you tumbling down.

The Knysna Quays Waterfront is a major tourist magnet with an array of shops and eateries to either enjoy a meal at, to get your souvenirs to take home, or just to spend the afternoon relaxing on the boardwalk and enjoying the view. The parking though is a bit small so it's difficult to maneuver and from the entrance, you won't really realize the beauty of this shopping mecca due to the simple exterior

A mere 24kms away is the scenic town of Sedgefield. A bit more commercial than the other coastal towns, Sedgefield still offers beautiful beaches and a very serene coastal ambiance. If staying over there are many hotel options and adrenaline-type sports such as paragliding and adrenaline sailing.

Not far from Sedgefield is Wilderness and if the Garden Route was to be described in all its glory and beauty then this would be the town. Quite and untouched this immaculate piece of land has been so beautifully preserved except for the few homes littering the mountains and coastline. The stores are even so minimal that apart from your basics you won't get much. Although the beaches don't cater for a sea of tourists and have limited parking as well, everything is within walking distance so parking your car literally anywhere within the vicinity will still get you to the beach. The best view of the beach and the most sought-after accommodation can be found on the Wilderness Beachfront and because the town is situated in a valley, the higher you go the better the view gets. A must-see in Wilderness is the Map of Africa. This lookout point showcases the Kaaimans River Valley and the valley miraculously flows in such a way that it creates an identical outline of the African continent. If you look down into the gorge you will get a glimpse of the water which is brownish in color has been found to be extremely beneficial for one's well-being. Very few homes are found on the river's bed because the area encounters occasional flooding and from the opposite end of the viewpoint, you will get to enjoy a bird's eye view of the coast and paragliders gliding from the hill down to the ocean.

Another 10 km away is George which makes the town although isolated an enjoyable stay nonetheless.

Stay tuned for the journey from George to Waterfront Southern Sun. Check out the previous Journeys Port Elizabeth, Tsitsikamma, and Tsitsikamma national park