The Trans-Siberian Railway is the longest railway track in the world, running for a length of 9,289 km (5,772 miles). The railway runs from Moscow to the Russian Far East, with connecting lines branching off to Mongolia, China, and North Korea; making for one of the greatest train journeys in the world.
The railway was built between the years 1916 and 1891 by Tsar Alexandar III and his son Tsarevich Nicholas. Overlooked by the Russian government, this project was a way for Russia and Siberia to get better transport across the Pacific. Even today, the Trans-Siberian remains as the primary transportation link within Russia, not only getting people around but shipping over 30% of the country's exports as well. 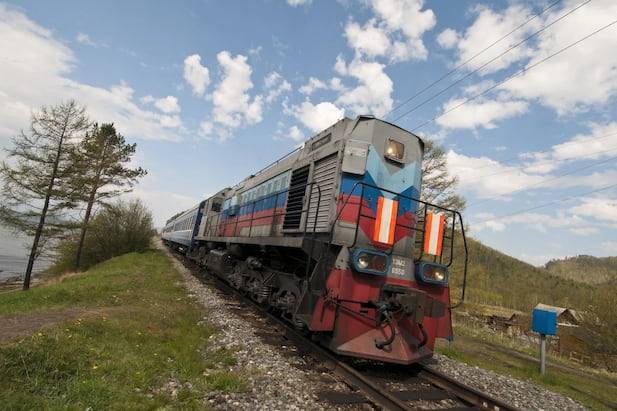 Image Credit: www.students.sras.org
The Trans-Siberian Railway is the source of one of the greatest train journeys in the world, passing through beautiful scenic towns, villages, and landscapes with different people and cultures.
There are also several Trans-Siberian traveler handbooks that you can read to get recommendations, and may even follow them to a key. Nevertheless, it's important that you do plenty of research beforehand about the attractions in the locations you want to visit and available amenities for Muslims.
The trip across Russia takes from 7-10 days; the exact length of the journey is different with each train (fast train, slow train, express, etc.) You will pass through some of the most fascinating cities and towns along the way. You can get a full list of all the stops during your journey from a Trans-Siberian railway map online, but here are a few notable places that you are most likely to encounter:

Your journey on the Trans-Siberian would begin at the Moscow Yaroslavsky Vokzal station in the capital city of Russia. This iconic city has played a major role in the development of Russia. Today, you can witness the beauty of the majestic historic buildings and cathedrals. You can also visit open-air theatres, eat local food, or go ice skating (in winter), before starting your journey.

This is one of the oldest and most historic cities in the country and is home to a UNESCO World Heritage Site. While one part of the city remains rooted in the past, another has blossomed into a commercial hub for the region, and it's truly the best of both worlds!

As the capital of the Chelyabinsk region, this city is situated at the center of Eurasia and on the eastern slope of the Ural Mountains on the Miass River. You can visit places like the Chelyabinsk Zoo and beautiful parks.

Founded as a fortress in 1716, it is one of Russia's most important transport hubs today. Located in southwest Siberia, Omsk is home to many cultural and historic museums and nature reserves. 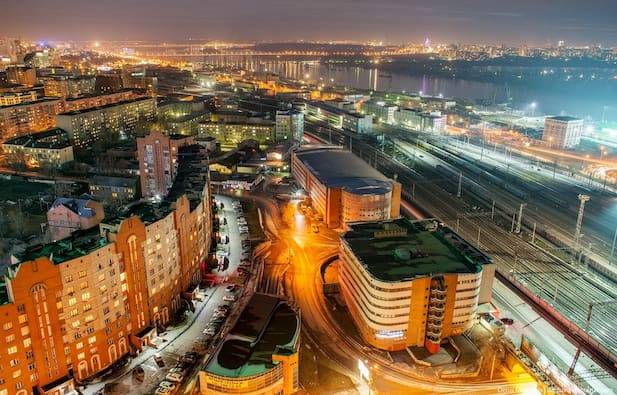 Russia's third-largest city, Novosibirsk, is a place of great culture and fun. The city has many museums, monuments, and a zoo, but it is also well known for its theatre and entertainment scene.

Irkutsk is one of the largest cities in Eastern Siberia, and a popular stopover for passengers on the Trans-Siberian. There are many museums, historic sites, and incredible 19th-century architectural buildings to explore. The famous Lake Baikal is also situated pretty close by.

Located on the Yenisei River, this city is the fourth largest in Siberia. Krasnoyarsk is known as “the most beautiful city in Siberia” and is popular for its nature. It is home to sprawling forested mountains, the Royev Ruchey zoo and park, ski resorts, and nature reserves.

The city that gives off an “exotic” vibe (compared to the Russian cities so far) is one of Siberia's most popular locations. Ulan-Ude has an Asian atmosphere and a very prominent Mongol-Buddhist culture. You can visit Buddhist temples, museums, and beaches along Lake Baikal.

This formerly restricted military city is not very popular among tourists, but it's definitely worth checking out. Although there are few places to visit in Chita, the most fascinating part of your time here will be interacting with the locals and witnessing their day-to-day lives. 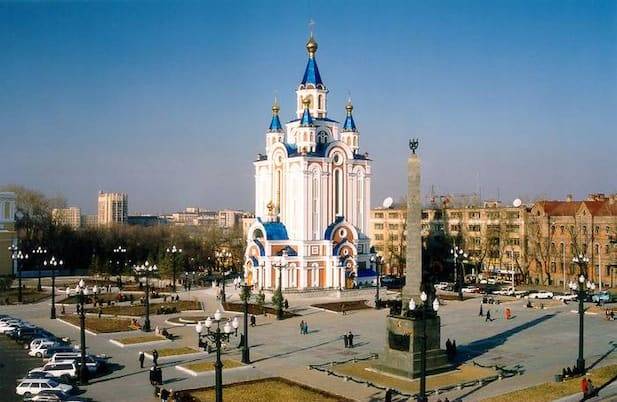 Image Credit: www.rusrailtravel.ru
Situated on the Amur River near the Chinese Border, Khabarovsk is a charming city to visit. The city has many calming and beautiful sites including beautiful parks, beaches, museums, and classic architecture. But do travel with caution, as there have been some reports of certain gangs being intolerant to foreigners.

Located in the Golden Horn Bay and very close to the Chinese border, Vladivostok is the final stop on your journey on the Trans-Siberian. There are plenty of sites to see, like the Vladivostok Fortress, Primorsky Aquarium, Lazurnaya Bay beach, and more.
You could take connecting trains along the Trans-Manchurian or the Trans-Mongolian to reach China or Mongolia. 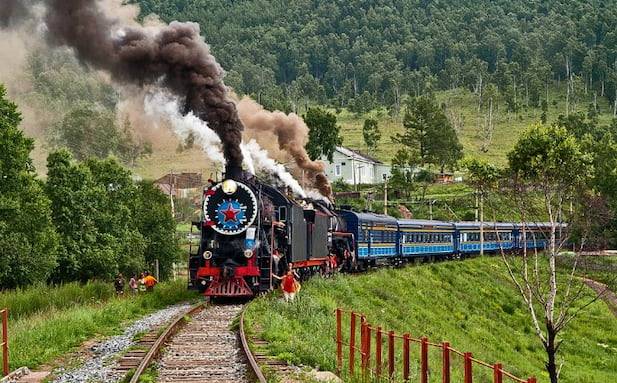 Image Credit: www.56thparallel.com
How much you end up paying will depend on how you plan and book a journey on the Trans-Siberian Railway. There is no single Trans-Siberian “Express”, but a bunch of different domestic and international trains operating along the railway.
Therefore, you could book a ticket to take you all the way from Moscow to Vladivostok (and get connecting trains up to Beijing), or stop off in between. Depending on some places, you wouldn't even need to book a ticket in advance because of the frequency of domestic trains.
Also part of the booking process is deciding if you want to make a stopover in any of the places in between and how long you wish to stay. If you are planning on making the trip international, then you will also need to get your visas sorted.
There are plenty of travel agencies that help book your train tickets, but not all of them offer the same price. In general, if you don't mind going to a bit more trouble you can save a bit of money. Agencies that take care of everything will charge you more, obviously. Your expenses will also depend on the class of ticket you choose, depending on how comfortable you want to be.
Although a journey on the Trans-Siberian Railway might be a once-in-a-lifetime opportunity and an incredible experience for you, it is very much just a part of the everyday life of the locals. As such, most trains aim to accommodate the everyday traveler as well as those looking for more comfort. Which train you will want to take will rely on the route you choose to travel, and you can decide this from the Trans-Siberian timetables on the internet. Each train has different classes of carriages to choose from. The different classes are:
Plazkart (3rd Class): This is an open carriage that has a communal-type experience with each compartment having six sleeper berths. Although it offers the least amount of privacy, it can be extremely fun as people often come together to talk, share food, and play games.
Kupe (2nd Class): 4-berth passenger cabins that are compartmentalized with doors that can be locked. Each carriage has a shared bathroom. This is a good option if you are traveling as a family, because it offers a good level of privacy but isn't as expensive as first class.
Spalny Vagon SV (1st Class): As expected, first-class cabins offer the highest level of comfort and privacy, not to mention the best service. Each cabin comes with two sofas on either side that convert into beds at night time. Some trains have private bathrooms in each compartment, but most have two washrooms at either end of the carriage.
*Note: These may also differ from train to train. There are even a few luxuries expressed that solely target foreigners.
As an estimate, a one-way train ticket from Moscow to Vladivostok could cost anywhere from $700-$1000 in a 4-berth sleeper, while a 2-bed sleeper might cost around $900-$1200. Keep in mind that these prices are excluding hotel charges for any overnight stay in the cities and visa costs, the latter of which would add around £120-$200 to your budget.

Halal Food on the Trans-Siberian Railway

All trains come with a dining car attached that serves as a restaurant, most often serving local cuisine. There is no way of saying if any of them will serve Halal food because it will depend on the particular train you choose, but it probably wouldn't be likely. You could request vegetarian options that do not contain alcohol, and also have coffee or tea there.
It's important that you stock up on a few packaged and ready-to-eat meals before starting off on the Trans-Siberian railway. It's also good if you bring your own tumbler and food container, and you can make use of the hot water boiler available in all coaches.
Things like instant noodles that just need hot water to be added, cereal, or canned food that just needs to heat up, are essential for Muslim travelers. There are also supermarkets where you can buy bread, jam, snacks, etc in railway stations. You can also find things like fresh fruit, milk, honey, etc. in almost all the stops along the way, so you could restock your stash as need be.
On your overnight stays, try and pick a hostel with a kitchen. That way you can cook actual meals like spaghetti with canned tuna or rice and vegetables for yourself. Make sure to also check the list of local restaurants serving Halal food in places where you plan to spend some time.

General Information About the Trans-Siberian Railway

1. Safety is not a big concern for travelers on the Trans-Siberian. Passengers have to present a ticket and their passport to enter the train, and every carriage has two conductors monitoring it 24/7. Doors to compartments can be locked from the inside (you can ask the conductors to lock it from the outside as well).
2. Women also often travel by themselves on the Trans-Siberian. In this case, it's best to go for 3rd class; it might have less privacy but it would be much better than being stuck in a closed compartment with other men.
2. Sockets and plugs for electronic devices are available in every compartment. You will also be given two sheets, pillowcases, towels, blankets, and mattresses.
3. Only first-class toilets have showers. Other passengers can pay extra for some trains to access a “service wagon”. Toilets are locked 20 minutes before, during, and 20 minutes after a stop.
4. Some things that would come in handy are cutlery, pocket knife, power bank, earplugs, eye masks, emergency medicine, a map, hand sanitizer, a Russian phrasebook, and clothes for hot and cold weather.
5. The Trans-Siberian is a 7-10 day train journey, which means you're going to have a lot of time on your hand. Bring plenty of entertainment like books, and movies to watch on your phone/tablet. You can also spend your time gazing through the windows as you pass through some incredible scenic sites like rivers, mountains, etc.