Thanks to Indonesia’s West Sumatera province, HalalTrip discovered this fascinating and iconic mosque in Padang, the province's capital city.

So, whenever you heard or read about Padang and West Sumatra, you should definitely check out this magnificent mosque at the heart of the province, one of the most notable things you can find in Padang and West Sumatra (Well of course other than the legendary Rendang which this province is also very popularly associated with).

We have much to tell about this mosque. Let's go!

The Great West Sumatera Mosque’s construction started on December 21, 2007, and finished on January 4, 2019. The time to build did take a little longer than expected as the project faced some budgetary concerns with the plan to construct a Grand Mosque has been in the works since 2005. However, the wait was worth it.

A Grand Mosque in Padang

During the meeting between the two heads of state from Malaysia and Indonesia, which was chaired at the time by Indonesia’s President Susilo Bambang Yudhoyono, the committee was perplexed about which mosque to visit for Friday prayers. So he chose the Tangah Sawah Great Mosque in Bukittinggi. From this experience, the local government learned that Padang lacks a mosque capable of accommodating a large number of congregants.

That is where the idea of the Grand Mosque of West Sumatra was born. This mosque was eventually built on Jalan Khattib Sulaiman due to historical factors. In 2006, the local government held a design competition where 323 participated and 71 designs were submitted. The winner of this competition is determined by a jury. The prize is also substantial, ranging between IDR 150 million and IDR 300 million. Finally, Rizal Muslimin's design with its unique and distinct shape with no dome was chosen.

This bold design choice resulted in a lot of complications, but it was eventually resolved and construction of the mosque officially began on December 21 with the laying of the first stone.

The first stage is completed to finish the building structure process. The construction of the prayer room and ablution area was continued in the second stage. The third stage involves the installation of ceramics and the interior of the mosque. The three stages were carried out using the provincial budget.

The fourth phase of the West Sumatra Grand Mosque's early stages was carried out for the completion of the ramp that slopes onto the road. 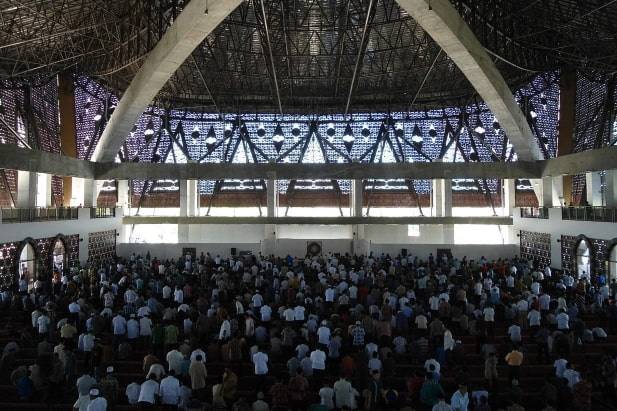 The West Sumatra Grand Mosque has been used for Friday and Eid prayers since early 2012, despite not being regularly used for worship. This mosque began to host religious gatherings at the provincial level, such as the "tabligh akbar", a large-scale Quranic recitation event. Governor Irwan Prayitno established it as a location for civil servants' routine praying activities in order to introduce mosques. However, due to unfinished electricity facilities and a lack of clean water, usage is limited.

The Grand Mosque of West Sumatra opened for regular prayers for the first time on February 7, 2014. The mosque was only open to the public on a limited basis because electricity and clean water facilities had not yet been completed.

This time, the mosque features the main prayer room, which is in the form of a large open room situated on the top floor. The top floor, which is seven meters above street level, is connected by a ramp, an open terrace that slopes onto the street. With a floor area of 4,430 square meters, the upper floor is expected to hold 5,000-6,000 worshipers. The second floor is a 1,832-square-meter-large U-shaped mezzanine.

In 2016, the West Sumatra government received assistance from the Indonesian Ministry of Public Works to construct the mosque's yard. The eighth stage sees the continuation of development funds from two provinces, West Java and Papua. This made it possible for them to complete the mosque's ground floor, which houses a meeting room, guard room, library, electricity agency, and other amenities. 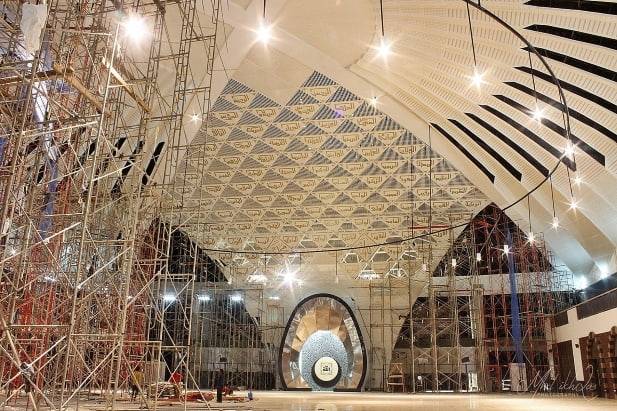 During the construction of the mosque's interior, worship activities were relocated to the ground floor beginning on July 16, 2018. The mosque's top floor reopened to the public in early 2019, with the first Friday prayer taking place on January 4, 2019. This event also marked the completion of West Sumatra's Grand Mosque.

The Grand Mosque of West Sumatra is the largest mosque in the province, covering over 40,343 square meters in size. Unlike other mosques you've seen, the design of this mosque is inspired by traditional Minangkabau houses, specifically Gonjong and Songket.

It is also a mosque with interesting architecture with the most interesting part of the design that makes it unique is the absence of a dome. Instead, it sports the design of a Gadang house with the four corners of the mosque pointing upwards. The design of the mosque also is said to symbolize the cloth that was used by the four leaders of the Quraysh tribe to carry the Black Stone (Hajar Aswad) to the current spot in Makkah.

The influence of Minang customs in the design is what makes this mosque so interesting. This is demonstrated by the Minangkabau-styled patterns and carvings that decorate the walls of the mosque. It can also be seen in the main room.

Furthermore, the mihrab is modeled after Makkah's Black Stone. It is surrounded by gold carvings of Asmaul Husna with calligraphy beautifully displayed in the main prayer room.

The Grand Mosque of West Sumatra is also known as the Mosque of 1,000 Wind Doors, because of the many doors to and out of the mosque.

The presence of a high tower with a pattern similar to the Prophet's Mosque in Medina adds to the magnificence of the Grand Mosque of West Sumatra. 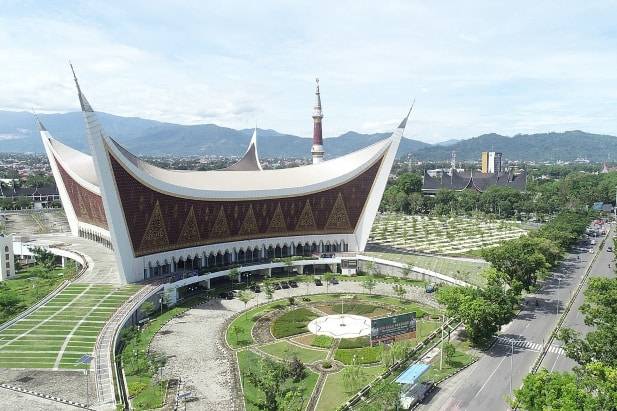 Along with six other mosques, the Grand Mosque of West Sumatra was named the award winner for its unique and attractive architectural design.

The Abdullatif Al Fozan Award for Mosque Architecture encourages innovation in planning, design, and technology that can shape the architectural identity of mosques in the twenty-first century.

There are four types of mosques: central mosques, Jam' mosques, local mosques, and community mosques. The award's motto is "Mosque Architecture in the Twenty-First Century."

A total of 201 mosques from 43 countries were nominated for international awards; 27 were chosen, and seven were announced as the main winners, including the Grand Mosque of West Sumatra.