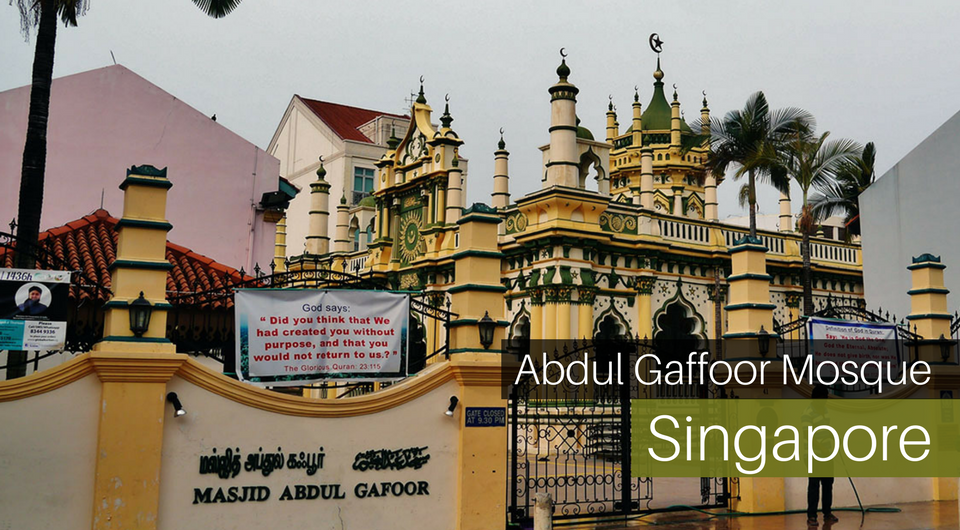 Unique in architecture, the Abdul Gaffoor Mosque is located in the Little India conservation district. This very distinct Masjid was named after its founder, Shaik Abdul Gaffooor Bin Shaik Hyder. Constructed in the early 1900's, the Mosque was built to replace the former Al-Abrar Masjid which used to exist in the district. Rich in history and architecture, Masjid Abdul Gaffoor is an unavoidable edifice with its vibrant colours and designs.

During the mid 19th century, the district of Kampong Kapor buzzed with Indian merchants and those who worked at the old Racecourse at Farrer Park. Dominated mostly by the South Indian Muslim merchants, the district was in need of a Masjid for the religious needs of the Muslim community. The Al-Abrar Masjid was then built in 1859. With the Dunlop Street Mosque Endowment established in 1881, Ismail Masoor and Shaik Abdul Gaffooor were appointed as trustees of the Masjid. ShaikAbdul Gaffoor was then the chief clerk at a law firm, and had obtained permission to build shophouses around the Masjid. With several shophouses and sheds built around the Masjid, the revenue gained from them were used to construct a new Masjid in 1907, which was completed in 1910.

With an area occupying 2,449 square metres, Abdul Gaffoor Mosque has a very distinctive symmetry and layout with Moorish details. The architecture of the Mosque is believed to be influenced by the Saracenic and Roman architecture. The inside of the Masjid is a splendid, wondrous fusion of Western classical motifs and Arabic Calligraphy on stained glass. The balustrades are sculpted with circular and lancet-shaped openings at the foundation with cinquefoil arches decked with detailed designs. The most prominent feature of the Masjid is its onion-shaped dome having a star and a crescent moon at the top. In October 2003, the Masjid received the Architectural Heritage Award from the Urban Redevelopment authority in recognition of its innovative restoration and unique blend of traditional and modern style.

With the main prayer hall restored, the Masjid can accommodate up to 4,000 worshipers. The Masjid has also been equipped with air-conditioners and the walls have been repainted with a vibrant green and yellow palette. The Abdul Gaffoor Masjid is a must-visit while in Singapore. Having a very commercial and historical background, the Masjid is at the very heart of the Indian community spirit which lingers on in this part of Singapore. Discover the beauty of Western classical architecture and the history of a lifetime, all under one dome!

Find a Mosque near you in Singapore