How to Eat Well Wherever You Go as a Vegan

As a Muslim, traveling while finding halal food in a certain part of the world might be a challenge for some. In places where ensuring the availability of halal food might be hard, being creative and open to other possible alternatives as a Muslim in order to be able to fulfill Allah's teachings and rules is something that we should always try to do!

When you are placed in this position and with its limitations, traveling as a vegan might also be an alternative to fulfill them. However, Muslims should approach this vegan diet with extra care as there are also limitations and rules that we should comply with. Read more to discover more!

What Is The Concept of a Vegan Lifestyle and Why Is It Popular?

Also known as veganism, a vegan lifestyle originated from any kind of activities that might lead to all forms of animal exploitation and cruelty in its consumption, whether it is food, clothing, and any other related purposes. Therefore, vegans do not consume animal products such as meat, eggs, dairy, or honey. The concept of choosing to follow a vegan diet recently became popular for some due to either religious, environmental, or health purposes.

In the New York Times article "Vegan Food: It's Not Fringe Anymore", a rising number of travel agencies are responding to the world's need for Earth-friendly meals by introducing sustainable traveling. Travelers can go on vegan food tours to savor creative tasty meals while playing a part in saving the environment.

Adopting The Vegan Lifestyle During Travels As A Muslim

When you are traveling as a Muslim and living life as a vegan is the only available alternative, then adopting that lifestyle temporarily would be one of the choices. However, we would still not recommend picking the whole vegan lifestyle in the long term as a life choice as the philosophy of veganism itself does not 100% align with Islamic values.

Allah has given His blessings by providing all the food for us Muslims to consume, in a lawful and with good intentions. Therefore, anything that can be consumed according to Islamic beliefs is something that we should cherish as Allah has planned all the halal and tayyib things for us to consume. Refusing Allah's blessing out of choice is not the wisest choice for us to take and therefore, veganism should not be a permanent life choice decision for Muslims, as there are also challenges in fulfilling our obligations as Muslims. Completing the Hajj, Qurban on Eid al-Adha, Aqiqah, or even accessing some cures to a certain illness (such as honey and milk) that requires the involvement of animals, are some of the things that we as Muslims will miss out on if adopting the full-fledged vegan lifestyle, as veganism adopts and promotes an animal-free lifestyle.

Therefore, we do not recommend our Muslim readers in adopting the vegan lifestyle as a long-term permanent choice. Unless on only consumption level and under occasions such as when halal meat or food is unavailable during your travels, harmful conditions to the body such as allergies or other intolerance to the animal products (such as milk, eggs, fish, etc), dietary restrictions during medical care, and other situational conditions that force us to do so, then veganism and plant based-food is a choice that we as Muslims can stick to temporarily during these certain conditions. Do note that veganism and plant-based foods do not automatically guarantee the halalness of the food, therefore, please double-check for the safety of consumption such as alcohol and other haram ingredients.

With the limited ingredients that are involved in creating vegan meals, time and innovation have changed with vegan meals and there are actually recipes and restaurants that are worth trying and are trending all over social media during your trip as a fun alternative! Hence with its growth, it is easy to find vegan restaurants in most parts of the world, even in countries with the highest meat consumption such as China and the United States (Fun fact: the only vegan restaurant with 3 Michelin stars is located in Beijing, China!). But how do you make the most out of your trip as a Muslim while adopting the vegan diet during your travels? Let's read on:

5 Muslim Travel Tips During Your Journey with a Vegan Diet

Here are some tips for you to get around as a Muslim while adopting the vegan lifestyle so you can eat safely and travel well where you go:

1. Choose Vegan Plane Meals (if Halal food is not available) 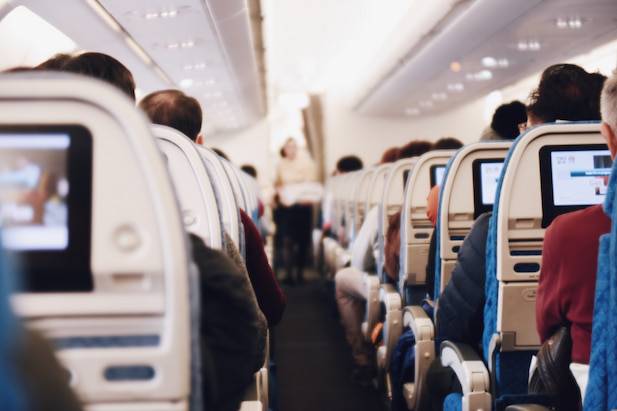 No Halal food is available on board even after further confirmation? Then vegetarian options are one of your possible alternatives to pick. Most long-distance flights offer vegan and vegetarian options when you are booking your flight. Don't wait till the last minute to pick your option as food caterers will need time to prepare. Don't worry about the taste, vegan plane meals are often delicious!

You can also opt to purchase meals on the go after passing airport security. We do not recommend bringing food from home as there is a likely chance it will be confiscated by security.

Information is at your fingertips if you use the right mobile applications.

You can search for vegan traveling ideas on social media apps such as Instagram (e.g #vegantravelguide, #veganlondon, or other hashtags that could be helpful during your visit) or check out our app for the best restaurant recommendations near you. Get a sneak peek at some signature favorites and reviews before deciding on the best pick. But don't lose track of time scrolling away!

3. Have Vegan Snacks In Your Pocket 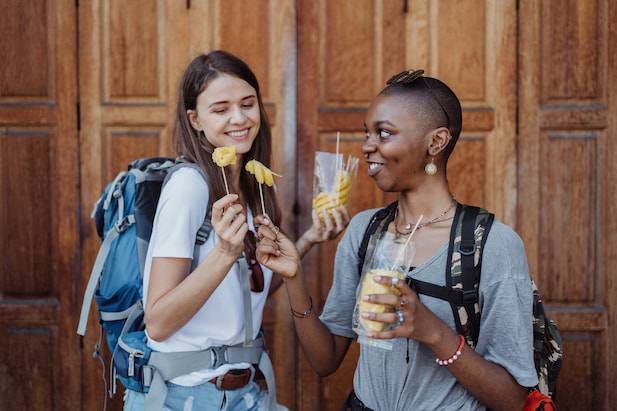 You may be on a 5-hour hike in the mountains or a long bus ride to the next destination with no restaurants in sight. This is where having a few vegan snacks in your inventory will come in handy. We recommend having a cereal bar, a fruit, some chocolate, and a bag of nuts to fuel you on your trip.

One of the best go-to snacks is a Fuji red apple and vegan trail mix. They are one of the all-season favorites and super low-maintenance to bring around.

4. Meet With Vegans In The Local Community 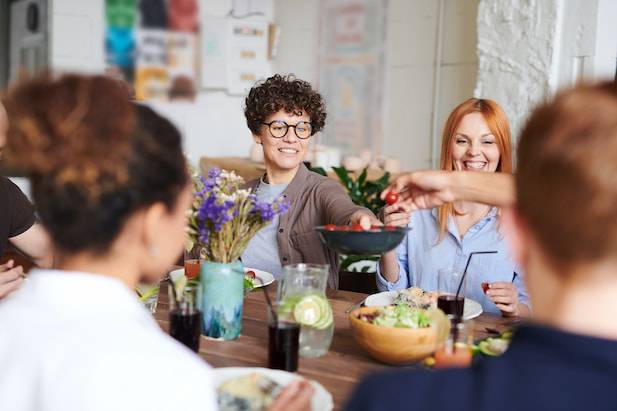 Traveling is all about being adventurous and that means speaking to strangers! You can make friends with the staff at that vegan restaurant to get some local insights on the best food in town or check out the local communities on Meetup, Facebook, or Couchsurfing. If you are lucky, you may get a delicious home-cooked vegan meal and a free tour around the city. 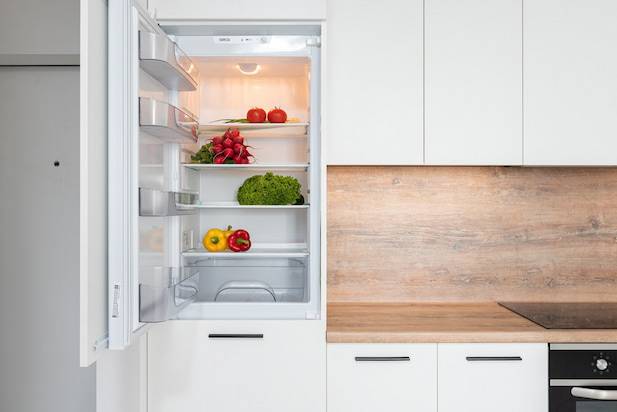 Halal-friendly establishments with Muslim-friendly amenities should still be your top priority. However, vegan accommodation might be a great pick as some hotels and AirBnbs practice a 100% vegan environment with no usage of animal products on their pots, pans, furniture, and so on, minimizing the possibilities of haram substance to exist and adding to your worries. You can surf the internet for travel information on whether an accommodation is vegan-friendly as there are usually indicators on each listing. If it is hard to find a similar establishment in your area, you can choose a regular hotel and ask in advance if they have a vegan-friendly room or dining experience.

What Is The Vegan Capital Of The World?

Brighton is known as the vegan capital of the world. Brighton is a city in the United Kingdom and has over 200 vegan-friendly restaurants for a population of 290,000 residents! You can find all sorts of vegan cuisine from Asian to Mediterranean restaurants around the streets of Brighton.

Other Popular Cities For Vegan Cuisines Around The World

If Brighton is too far, here are some famous cities that have great vegan restaurants to choose from:

Eating healthy and well as a Muslim with a vegan diet does not have to be a hassle with these 5 useful tips on how to travel vegan around the world! If you like this article, share it with your friends and help them in traveling through these vegan travel tips.

Do you have tips of your own? Do let us know in the comments below!