The mosque is not merely a physical construct with specific architectural features. The mosque is the house of God, a sacred place. Even the small, insignificant mosque at the corner of the street next to where you live is as sacred as any place can be. Because true spirituality isn't bound by the material world or time-space restrictions.

However, no one can deny that some mosques have more weight than others, especially when it comes to historical and cultural significance (Masjid al-Haram for example).

Aesthetics also play a huge role in giving some mosques more sacredness than others. “Verily, Allah is beautiful and He loves beauty.".

Therefore, I'm mainly basing this list of the top 10 Mosques to look out for in 2023 on beauty, as far as the eyes are concerned. But that doesn't mean I will not list mosques based on their sacredness.

By the way, this is an invitation to consider going to haj in 2023 if that's a possibility. Anyway, no one can deny that the whole complex that makes up the Masjid al-Haram in Makkah is one of the most elegant and beautifully architectured complexes in the world.

However, the beauty of the place is the last thing that occupies the mind in a such sacred place. Knowing that the mosque and the area have such significance in Islam makes it even more special. The mosque and area around it are steep in history so it's a great place if you're looking to visit the Islamic sites to gain a deeper understanding of our beloved religion.

That's why Masjid al-Haram should always be on the list of any Muslim's travel list in 2023 and every other year to come.

Al-Aqsa mosque in Jerusalem or al-Quds is a central location in the chronicles of the revelations of the Prophet (SAW). Although the building itself is probably outdated and not as well-decorated or elegantly architectured as the other mosques on this list, you'll still be amazed at the beauty of the Al-Aqsa Mosque with the elaborate designs that have stood the test of time. It still holds the power of putting you in spiritual bliss, knowing the events that such a place signifies.

You can read about the importance of the Al-Aqsa mosque for Muslims. 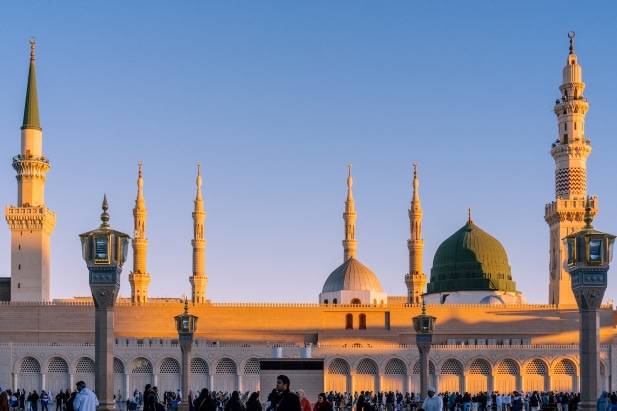 Al-Masjid an-Nabawi in Medina is the second largest and holiest mosque in Islam, ranking after the Masjid al-Haram in Mecca. The mosque has gone through many extensions over the centuries, but it's still the same holy building that the Prophet (SAW) personally contributed to its building process.

Merely knowing that our beloved Prophet (SAW) lays in peace a few meters away from you is enough to put one in a state of spiritual bliss.

Check out our blog about 10 of the oldest mosques in the world.

When it comes to historical significance and aesthetic beauty, a few mosques can compete with Istanbul's Blue Mosque, which is an architectural Islamic masterpiece.

The Blue Mosque of the Ottomans asserts the level of cultural sophistication that Islamic culture has reached before the industrial revolution changed the world radically.

So, if you're interested in that period in history, you must consider visiting Istanbul in 2023 and exploring both the history and landmarks that mark that era. 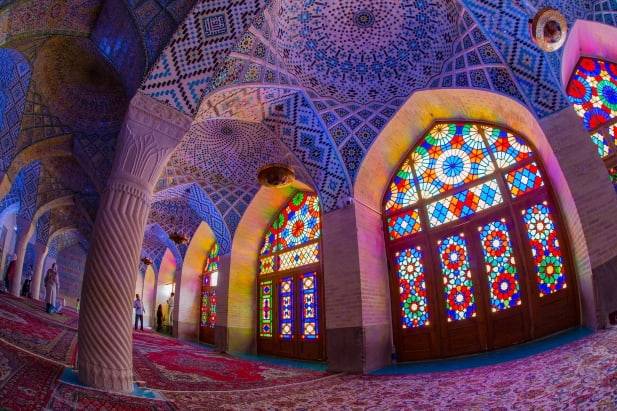 Also known as the Pink Mosque, Nasir al-Mulk Mosque is simply one of the most elegant places of worship that abide by the fact that “Verily, Allah is beautiful and He loves beauty.". The color schemes, the architectural intricacies, the general design, and the decoration are all combined to create a state of bliss that makes praying more of a spiritual experience with an aesthetic edge.

Perhaps the most remarkable two characteristics of this mosque are the genius colorful glasswork and the beautiful pool that stretches in front of the entrance gate.

Situated in Islamabad, Pakistan, Shah Faisal Mosque is one of the most unique mosques because of its futuristic design. When I look at pictures of this mosque, I think about Islam in 2123 and the kind of mosques our great-grandchildren will pray in.

When it comes to prestige and grandiosity, the people of Abu Dhabi are known for their luxurious taste. The blindingly white color of the Sheikh Zayed Grand Mosque complex and the golden decorations is a sight to behold.

This mosque even holds a world record for the largest example of marble mosaic in the world, which looks super elegant. 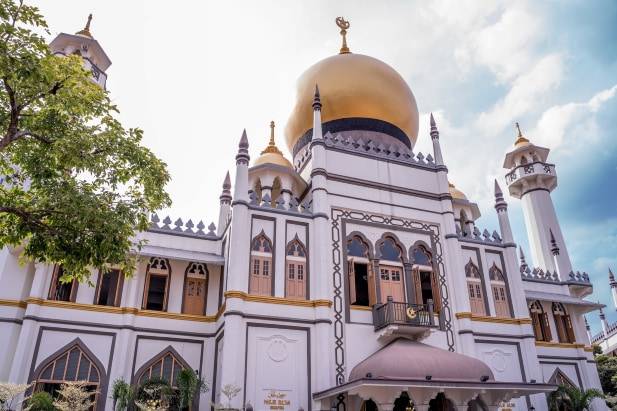 Though not a large mosque, Masjid Sultan in Singapore stands out as one of the most beautiful mosques, especially for Singaporeans.

With its golden dome that reflects the light of the sun, Masjid Sultan stands gives you a glimpse at Singapore in the 20s and 30s of the 20th century, a period that the mosque still preserves within its walls.

Fun fact: The black ring under the dome of the mosque is made out of recycled glass bottles donated by Muslims during the construction of the mosque. It's now a design feature that makes the mosque unique.

If I ranked this list only based on aesthetics, I'd put Putra Mosque at the top of the list because I think its design and surrounding environment create a visually pleasing landscape.

I can imagine myself spending hours and hours from the other side of Putrajaya Lake admiring the beauty of Putra Mosque. 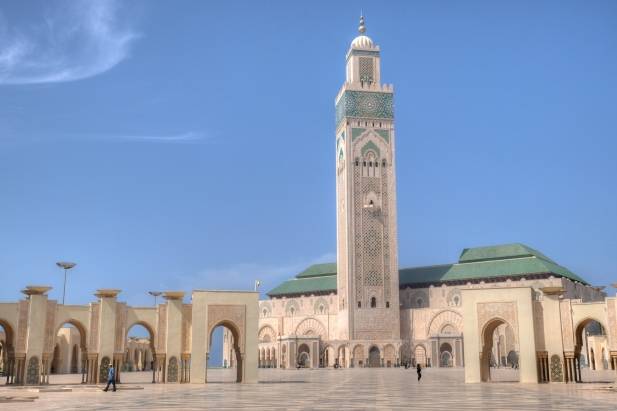 As a Moroccan, this one hits closer to home because I grew up learning that Hassan II Mosque in Casablanca has the tallest minaret in the world (second as of 2019) and it's one of the most expensive and beautiful mosques to be ever built in the world. I also learned that my father even contributed a very small amount of money to build this mosque.

Situated at the Western Edge of Africa, with nothing but the vast Atlantic ocean behind it, Hassan II mosque is one of those iconic places that pop up whenever you type Morocco in a search engine. It has a majestic quality that renders the place a matter of national pride in Morocco.

Also check out the things to do in Casablanca, Morocco here.

So, there you have it. That's my list of the 10 Mosques to look out for in 2023. If you need to find all mosques near you wherever you are in the world, please consider downloading our app.